Self-Supervised Learning - Part 3: The idea of Amdim and comparison with two other contrastive learning approaches

Let's first briefly talk about the ideas of Contrastive Learning, Noise Contrastive Estimation, and why they are used.

In the pre-training stage of Self-supervised learning (the stage that a model solves pretext tasks), this process is carried out with the hope that the current model would learn meaningful representations from unlabeled data. Especially in the case of the contrastive approach, researchers try to contrast one positive sample with a set of negative samples to learn useful representations (See Figure 1 below). Notice that all the mentioned samples are unlabeled. 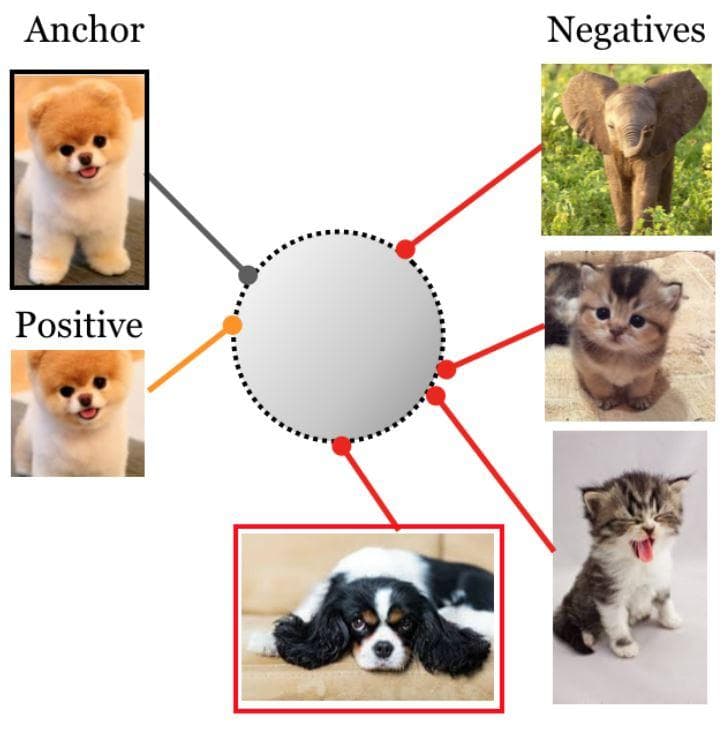 Figure 1: Self Supervised Contrastive (Image from [6]). A single positive sample which is produced from the anchor (original image) is used to contrast with a set of negative samples to learn meaningful representations. The big gray circle in the center is the embedding space. Samples of the same class should be mapped to locations close to each other while those that are of different classes should be pushed apart. Due to the unlabeled data, there will be cases a positive sample is falsely seen as a negative sample (as the white and black puppy here).

As we have known, a classification neural network is actually a multi-class classifier. When there are many classes in a dataset, the network is also required to have as many output neurons. Usually, many networks use the cross-entropy loss function, which needs output neurons to represent probabilities. And these probabilities are obtained by the softmax function of which the computation is not efficient enough in the case of a huge output layer.

To overcome this, Noise Contrastive Estimation (NCE) is used. The idea/purpose of NCE is to transform a multi-class classification problem into a binary classification problem. The softmax to estimate the true distribution of a dataset is no longer used. Now, each training sample fed to the network includes a positive pair and a number of negative pairs. Usually, a positive pair consists of different augmented versions of the anchor sample and a negative pair is constructed by the anchor with a sample randomly picked from the other classes. This pretext task of discriminating positive pairs and negative pairs will help the network learn to produce representations having great meaning. So, that is why it is called binary classification (as we have seen in the figure above).

Several things also worth noting here are the cross-entropy is not robust enough to noisy labels [8, 9] and it possibly produces poor margins [10, 11]. These factors can badly affect the generalization performance.

In the next sections, before coming to Amdim, it is necessary to first introduce two contrastive learning methods that were published earlier: Contrastive Predictive Coding (CPC) [1] and Deep InfoMax (DIM) [2].

The amount of information in high-dimensional data can be very huge, so it is a very difficult task for the model to extract effective representations. CPC tries to deal with this problem by using autoregressive models. In particular, it uses these types of models to predict future representations in latent space (with the hypothesis that latent representation will be more compact than the input and directly predicting future representations from the previous ones also help to reduce the time execution). They also use a contrastive loss which makes maximally useful information can be captured by the latent space. With the contrastive loss, the model also becomes tractable by using negative sampling.

Figure 1: Overview of Contrastive Predictive Coding (Image from [1]). Here, audio input is used as an example but it can be replaced with another type of input such as an image.

Let’s describe the picture above. From bottom to top, the first thing is the audio input of which its vectors are represented as x. genc is a non-linear encoder that receives the sequence of observations xt as input and produces a sequence of representation zt , possibly with a smaller temporal size. Next, gar, which is an autoregressive model, summarizes all z(<=t) in the latent space and produces a context latent representation ct.

Some of the things proposed in this paper include: First, the embedding vectors are extracted from the high-dimensional input by a non-linear encoder. Those latent vectors should be more compact than the original ones, which gives a better opportunity to model conditional predictions. Additionally, powerful autoregressive models are used to accumulate the information (context latent representation) from the latent vectors through time. And these summary features are then used to (directly) predict the future latent vectors with the purpose of reduction in processing time. They build loss function on the Noise-Contrastive Estimation, which allows us to train the model end-to-end.

Their main contributions include: They formalize Deep InfoMax (DIM) model. DIM does both tasks of estimating and maximizing the mutual information between input data and high-level representations in a concurrent way. Notably, DIM can choose whether local or global information is prioritized to adapt the learned representations for classification or reconstruction tasks. Adversarial learning is also used to keep the statistical characteristics of the representation the same as those of a specific prior.

Figure 2: The base encoder model in the context of image data (Image from [2]).

Training principle: Find the set of parameters/weights so that I(X, E(X)) is maximized. The input X can be a complete image or just a local patch. 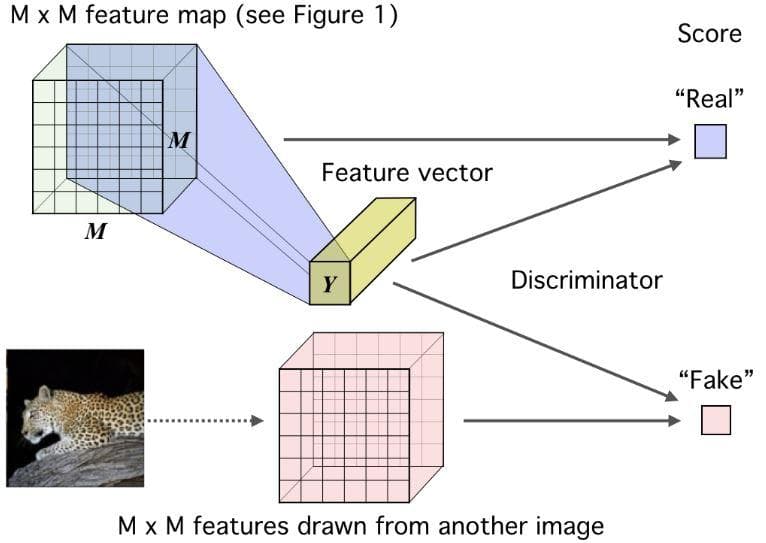 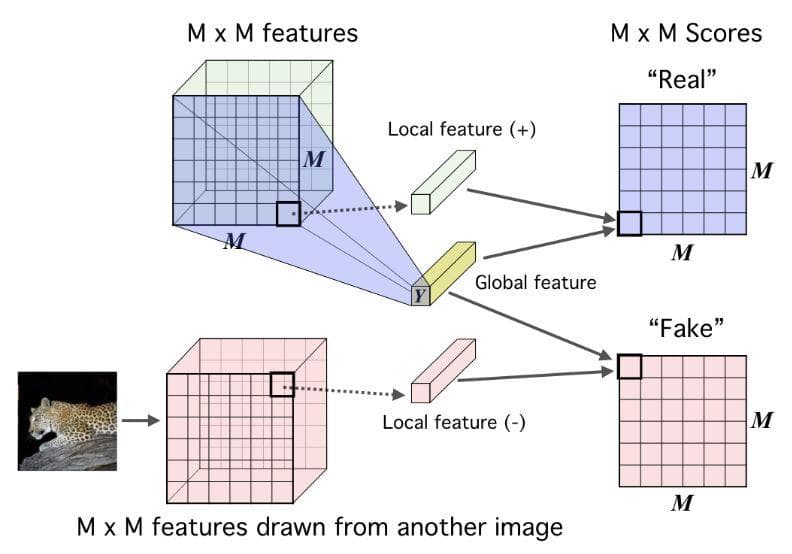 It is the same as figure 3 except lower-level local feature vectors along the temporal dimension of the MxM feature map are sequentially combined with the global feature vector Y. The result is an MxM matrix of which each element is a score of a local-global pair.

The reason why we have to consider “Real pair” and “Fake pair” as in figures 2 and 3 is DIM is based on the idea of contrastive learning.

As the title of the paper has said, this approach is also about maximizing mutual information, but between features from different views of input rather than between input and the corresponding output. Views here can be multiple positions of view, different modalities, or even samples from different types of augmentations. It is hypothesized that common high-level factors that exist in most of the views can be acquired by solving the task of mutual information maximization.

Amdim is built on the basis of local Deep InfoMax (Figure 4 above) with 3 extensions:

In the following parts are the five main "characteristics" of Amdim:

Unlike local DIM that uses global features and local features, Amdim uses the terms “antecedent features” and “consequent features” due to its convention of applying augmentations to the original input to have other samples.

The authors of Amdim maximize the NCE lower bound by minimizing the loss below:

is a set of negative samples and

is a softmax function:

are two parametric functions that need to be calculated. In this case, these functions are deep neural networks and parameters are their weights. Concretely,

maps a pair of (antecedent feature, consequent feature) into a single scalar value/a score. The higher score leads to the higher possibility that this is a positive pair which means both the antecedent and consequent are extracted from the same sample.

Now that we have understood the symbols, let’s analyze a little bit more about the softmax function. In the numerator is the exponential of the score of a pair of antecedent and consequent (can be positive or negative). In the denominator,

is got from the union set of negative samples and positive samples, then the sum of exponentials is calculated. Their goal is to make this fraction high in the case of the positive pair and low in the case of the negative pair. The more this becomes true, the lower the loss function will be. What is the connection with the maximization of NCE bound?

Some of the augmentation techniques used in this paper are random resized crop, random jitter in color space, and random grayscale transformation. Transforming for the case of augmented features (features of augmented samples), the loss will now become:

Note that the superscript does not have any connection with exponentiation. In this loss, x1 is an augmented version of the original input x, x2 is another augmented version of the original input x. One more change we can also infer from this loss is that the pair does not need to be constructed from the global feature and the local feature of the same sample, but it can be of two samples coming from different types of augmentation (see figure 4 below). 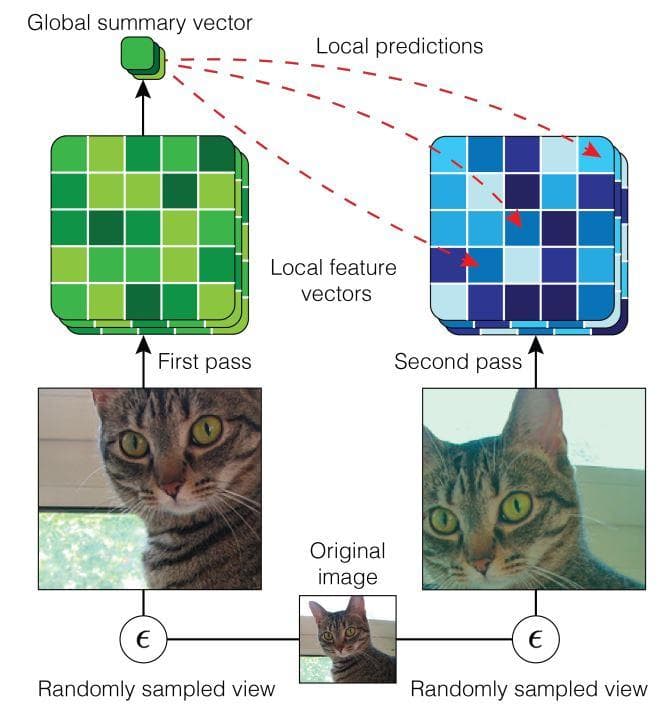 Figure 5: Local DIM with predictions across views generated by data augmentation. (Image from [3]).

Another specialty of AMDIM is multiscale mutual information. Multiscale means the multi-level prediction in which each element of a feature pair can be extracted from different layers of a network. It is not strictly set as above that the mutual information must be between a global feature from the top-most layer and a local feature from a specific lower layer. In this procedure, features at every step in a forward pass of one view can transfer mutual information with those of another view. Although many pairs can be constructed and calculated, the authors only consider some specific pairs in the experiment. 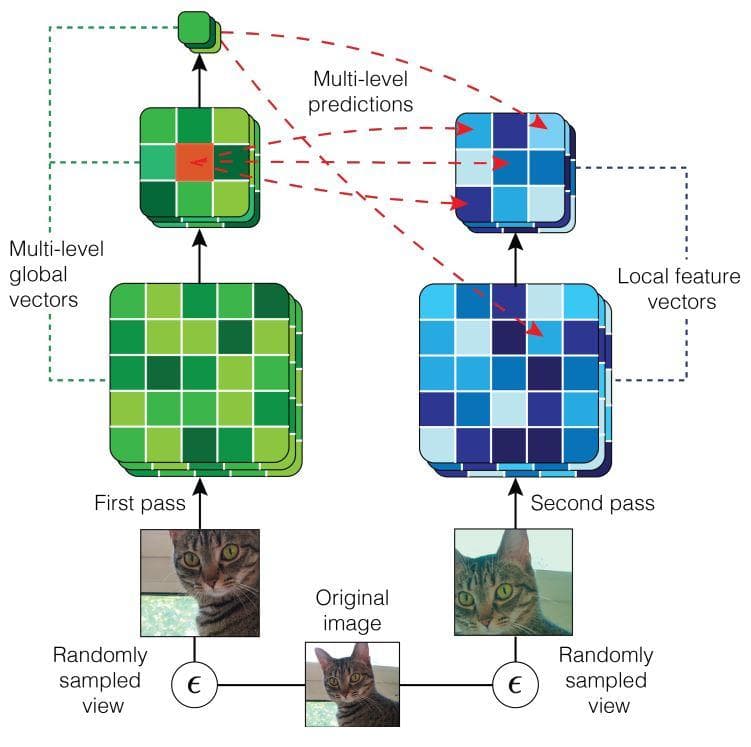 About the encoder, they use the one built on the standard ResNet with some modifications so that it can be fitted for DIM. In particular, the main problem they concern about is receptive fields. They want to adjust the receptive fields in a way that two features in a positive sample pair do not intersect by a large amount. In other words, the two features should not be the ones that are extracted from the too similar region of the input image because this will make it easier to get the mutual information between them. This situation goes on the opposite side of the initial hypothesis. To keep the feature distributions stable, they also avoid padding.