DeepInfoMax and Amdim are two self-supervised models that are very popular in recent times. They are constructed based on the idea of the InfoMax principle. Therefore, to fully understand these two models, we must first know about the underlying basis of the InfoMax principle which includes entropy, mutual information, their properties, and relations.

The knowledge of entropy is required to understand mutual information.

Two examples to show when entropy is low and when it is high.

Example 1 Compute the entropy of a fair coin (from [1])

Example 2 Compute the entropy of an unfair coin

=> The entropy value is less than that in example 1. Because the coin will appear heads most of the time, which means it is more predictable (less unpredictable). Thus, the entropy is low.

=> The more values a random variable can take, the more unpredictable it becomes.

The equation for mutual information of two random variables X and Y where joint distribution is represented as PXY(x,y):

Another way to think about the mutual information

Suppose we have an information system that can be split into 3 components: sender, channel, and receiver (or in the particular input image, neural network, and output representation). The channel can be represented by a transition probability matrix.

The Shannon entropy equation on X and on Y:

The formula of conditional entropy, it measures the uncertainty of X given Y:

The formula of joint entropy (the entropy of a joint probability distribution) on X and Y:

Then, the equation mutual information will be:

Let's verify if it is equal to the above equation for mutual information of two random variables X and Y:

So yes, they are equal except for the difference in the base of the log. For your information, the log base can be 2, 10, or e, which depends on what information units an information system needs.

And with a theorem H(X|Y) = H(X, Y) - H(Y) of conditional entropy (if X and Y are discrete random variables), the mutual information formula can also be written as:

To be more clear about the above formula, let’s consider 2 cases:

Finally, mutual information can be defined as a measurement that quantifies the transmitted information in the channel.

From the two cases, we can infer that in the AMDIM model, the network tries to keep the two samples of the same class (despite being from different viewpoints) as close as possible. From a different view, ‘close’ here means there is an “invisible” channel from one sample to another sample and this channel is ideal so that the mutual information of two samples are maximized. Then meaningful features/representations can be learned, especially those that can deal with the challenge of varying viewpoints (location, color, light, scale variation due to augmentation).

In [2], the problem is formulated as follows: “the central principle for an information-theoretical optimization in feedforward structure says: for a given xi, yj and a given input distribution p(xi), determine the matrix P(yj | xi) in such a way that the mutual information becomes maximized”

→ Therefore, in the case of DeepInfoMax, P(yj | xi) represents the parameters/weights of a neural network. Reformulation of the expression for the mutual information [2]:

Mutual information is closely related to the Kullback-Leibler divergence - a measure of how different one distribution is from another distribution (“distance” between two distributions).

The equation of Kullback-Leibler divergence of two distributions P(z) and Q(z):

The mutual information is actually the Kullback-Leibler distance between the joint distribution of X and Y. The product of the marginal probabilities:

The symmetric property in mutual information:

The additive property for independent variables in mutual information. If

This principle is for optimization in information processing systems and also artificial neural networks. Its main point can be described by this sentence: a function that receives a collection of inputs I to produce a collection of outputs O needs to be chosen so that the mutual information between I and O is maximized [7].

In terms of a perceptual network with local feedforward connections [7] (see Figure 2, which is very similar to the neural network nowadays), we can point out some knowledge to understand more clearly about the Infomax principle. This paper of Linsker is actually the research work from which the InfoMax principle derives. 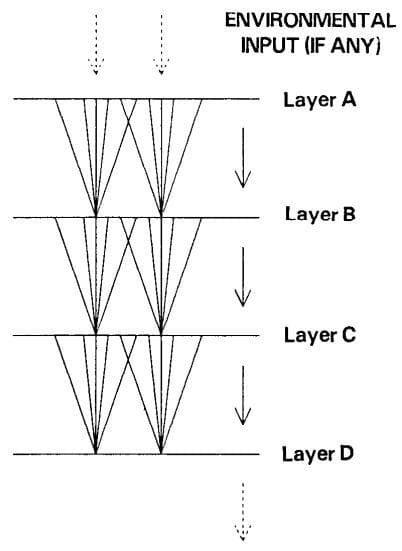 Some properties of the InfoMax principle in L-to-M (input-to-output) transformations (from [7]):

DeepInfoMax is a self-supervised learning method with the aim of learning from unlabeled data and being more independent with manually annotated data.

Its process operates in a similar vein with the InfoMax principle: it learns to create good high-level representations by trying to maximize the mutual information between the input and output of an encoding architecture, while the InfoMax principle for the self-adaptive perceptual network above maximizes the mutual information between outputs of different layers of neural architecture.

By doing this, it hopes the model can learn the way of how to extract representations that still keep the most relevant and important cues from the original input.

We can also see this objective of maximizing mutual information as a pretext task in self-supervised learning. Through this pretext task, the authors hope the neural architecture can extract features/representations of good quality.

The last one - Amdim is developed based on the DeepInfoMax with some modifications and improvements.

Amdim is a self-supervised learning model based on local Deep InfoMax (DIM). “Local DIM maximizes the mutual information between a global summary feature vector, which depends on the full input, and a collection of local feature vectors pulled from an intermediate layer (or from different patches of the input image?) in the encoder.”

What are its differences with DeepInfoMax

It carries out the mutual information maximization between features from multiple views of a context object, not between the input and output of an encoding architecture. Multiple views of a local spatial-temporal context can be obtained by looking from different locations (putting cameras at different positions) and gathering information from different modalities. Data-augmented versions of an image can also be seen as multiple views of an image. To maximize this type of mutual information, it is required that a model has the ability to acquire information of high-level factors that coexist in every single view of a specified context (for example: “presence of certain objects or occurrence of certain events”).

Here we have shown some knowledge of entropy, mutual information, InfoMax principle, DeepInfoMax, Amdim and try to connect pieces of information so that you can acquire their relations in the most simple way we can. About DeepInfoMax and Amdim, we just provide the ideas. The details of them may be exposed in our next posts.

[6] What does maximizing mutual information do?, StackExchange